At the moment Anu is working extra hard in the pandemic as a doctor, however in her spare time she is writing her debut Novel “The Blue Monkey ”

Anu Kumar Lazarus’ monologue “The Survivor” has been published in 30 Monologues and Duologues for South Asian Actors. 30 Years of Kali Theatre. Published by Methuen

A culmination of intense work with Sascha Milovic, Lucy Railtin and Complicite
A joy to be part of!

Anna’s new play FREEDOM is to be read at the Tristan Bates Theatre, Covent Garden as part of KALI THEATRE’s WAR SEASON

Anu is very proud to have taken part in The Filibuster Project.

Created and Curated by Deborah Pearson as Artist in Residence at Somerset House , this piece explored the minds of 12 women aged 13 to 73

Anu is delighted and privileged to be working with Complicite under the direction of Sasha Milavic. Her project EVERYTHING THAT RISES MUST DANCE will be celebrated next year 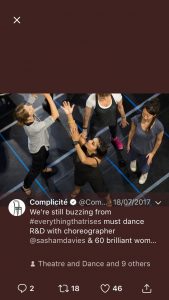 Anu has been selected as a finalist for the United Press Ltd Poetry Prize. Her poem “Columbia Rd” will be published in an anthology called THE WIDER VIEW

Currently Anu is working on an original musical

Living the Dream , a contemporary myth for theatre called SATH! and the SENSORINET project

TWELVE : Twelve is shown as a work in progress at THE WOMEN CENTRE STAGE PROJECT at

THE NATIONAL THEATRE alongside TIMBERLAKE WERTENBAKER and GRAEAE THEATRE

Anu has been selected as a finalist for the B3 media talent lab!